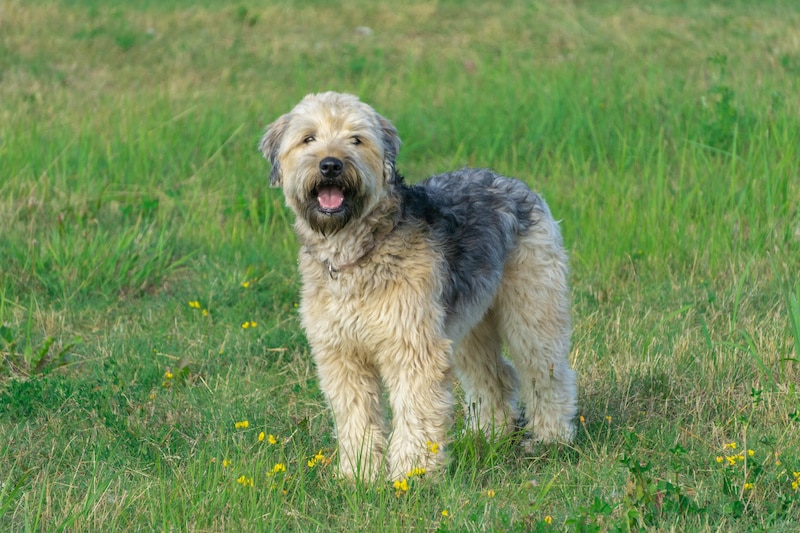 The Soft Coated Wheaten Terrier is a playful, loving, energetic terrier that was originally bred as a farm dog in Ireland. They love people and are great with the whole family.

How much do they shed? Soft Coated Wheaten Terriers are a low shedding breed because they do not have an undercoat, and have hair rather than fur which has a longer growth cycle. They are also considered to be a hypoallergenic breed. The only caveat is you will need to put more effort into brushing Wheatens to keep their coat in good shape.

Let’s take a closer look at how much shedding they do, what they’re like to groom and what makes them so special, so you know what to expect.

And there are two main reasons for this. The first reason is because they do not have a double coat, they have a single coat which means they’re not seasonal shedders like most dogs.

Seasonal shedding typically occurs in spring and fall, when the dogs undercoat naturally sheds (AKA blows coat) to prepare for the change in weather. And thankfully, you don’t have that concern with a Wheaten Terrier because they don’t have an undercoat.

The second reason they don’t shed much is because, similar to breeds like the Tibetan Terrier and Black Russian Terrier, they have hair rather than fur. Which means their coat is similar to human hair.

One of the main differentiators between hair and fur is that hair doesn’t stop growing whereas fur does. And when fur stops growing, it soon falls out to make way for the next hair that will take its place. Which is why shorter haired breeds can actually shed more than longer haired breeds.

With that being said, they do shed a little bit, so you will notice some hairs floating around, but typically a lot less than most dogs.

It takes a fair amount of consistent effort to groom a Wheaten Terrier. It’s not as extreme as a breed like the Afghan Hound, but far more than breeds with a short coat, like a Bulldog for example.

This is because their soft, silky hair can get quite long given that, like human hair, it doesn’t stop growing. This often leads to matts, tangles and debris getting stuck in their coat.

It does depend on which type of Wheaten you get though. The Irish breed has wavy, silky hair which makes it easier to groom than the American Wheaten, which has a thicker, denser coat.

The best way to groom your Wheaten Terrier is with a pin brush or slicker brush. And if you’re not sure what that is, you can learn about the different types of brushes here.

Start by slowly and gently brushing the coat to remove debris, loose hairs and dirt. Then work your way towards using a fine tooth comb to finish the job.

And if (or should I say when) you find a matt or tangle, take your time to get this out gently with a pin or slicker brush, or even just your hands. Then go back over it with a metal comb.

It’s not difficult, but it does take time. Especially if you don’t groom your Wheaten for extended periods of time. So it’s going to be far easier if you can stick to a regular routine of brushing.

Not only will this remove any dead hairs from his coat, but it will help distribute the oils on his coat evenly, which provides a natural defence against dry skin and excessive less hair loss.

But this doesn’t mean they are not going to upset your allergies or that they are perfect for people with asthma, it just means they are generally better suited for these folks.

Even hairless dogs like the American Hairless Terrier can cause some allergies to people with extreme sensitivity. And the reason is because the allergens do not come from the hair itself, they come from the dried saliva and dander (dead skin) of the dog.

It’s just that these allergens attach themselves to the hair, which then spreads further when that hair falls out. So the more shedding a dog does, typically the worse reaction allergy sufferers will have.

So “hypoallergenic” breeds like the Wheaten and Basenji for example, are not completely allergen free, but definitely a better choice if this is something you’re concerned about.

There’s not a lot you need to do to reduce shedding in a Soft-Coated Wheaten Terrier, because they don’t shed much to begin with.

The best line of defence is just regular brushing, which you’re going to have to do anyway, otherwise your Wheaten will end up with lots of painful matts and knots. So as long as you groom him regularly, you will be able to keep shedding to a minimum and keep his coat in top shape.

One thing worth mentioning though, is that you really don’t want to over bath your Wheaten, or any dog for that matter, or use the wrong shampoo. Because both of these can cause dry, irritated skin, which is a leading cause of excessive shedding.

The same goes for diet. You really want to ensure you are feeding your Wheaten a proper, balanced diet to avoid imbalances that may lead to dry skin.

If you are noticing a lot of shedding though, that could be a good indication you need to consult your local veterinarian. As sometimes this can be due to underlying issues.

Should You Adopt a Soft Coated Wheaten Terriers?

Wheaten Terriers are best suited to people who want a playful, loving and energetic breed that loves being part of the family. They’re known to be good around children and other dogs.

However, unlike their physical characteristics such as being medium sized, weighing about 30 to 45 pounds and having a wheaten colored coat (pale yellow/beige), their personalities can differ. It really depends on genetics, how they were bought up and the fact that every dog is unique.

That said, it’s not uncommon to be greeted at the door with lots of cuddles and kisses, even if you’re a total stranger! This is why the saying “wheaten greetin” has become so popular.

Aside from being affectionate, Wheatens are also very intelligent and easy to train, so make very obedient dogs. But they are part of the terrier group, so expect a bit of stubbornness.

One of the best ways to keep your Wheaten happy, other than lots of love and regular grooming, is regular exercise. They’re a very energetic breed that needs lots of walks, which is something to keep in mind when considering whether or not to adopt.

The Soft Coated Wheaten is a pure bred terrier that originates from Ireland, where it was bred for over two hundred years as a farm dog. Performing tasks such as watching and guarding livestock, herding and killing vermin.

According to Wikipedia, they share a common ancestry with the Kerry Blue Terrier and the Irish Terrier and were known as the “Poor Man’s Wolfhound.”

The “Wolfhound” referred to here is likely the Irish Wolfhound, which was a prized breed in Ireland at the time, and one that shares many similarities to the Scottish Deerhound, a breed that was referred to as the “Royal Dog of Scotland”.

In any case, Wheatens were recognised as a breed in Ireland in 1937 and made their way to the United States in the 1940’s. And these days, they’re less of a working dog and more of a family friend.

Yes, Wheaten Terriers are considered a hypoallergenic breed. This doesn’t mean they won’t upset your allergies, but does make them a better choice if this is something you’re concerned about.

Wheaten Terriers don’t smell bad and do not produce a smelly dog odor but, like any dog, can start to stink if you don’t groom and bath regularly enough. Just be sure not to over bath, as this can cause dry skin and shedding.

Do Soft Coated Wheatens bark much?

Wheaten Terriers are known to bark at strangers who come to the door, or if left alone for extended periods of time, but this can be dealt with through proper training.

Are Wheatens difficult to train?

Wheatens are relatively easy to train, but they can be a bit stubborn and independent like most terriers, so proper obedience training is worthwhile early on.

Read next: See our top 5 air purifiers for dog owners of 2021 (with buyer’s guide) 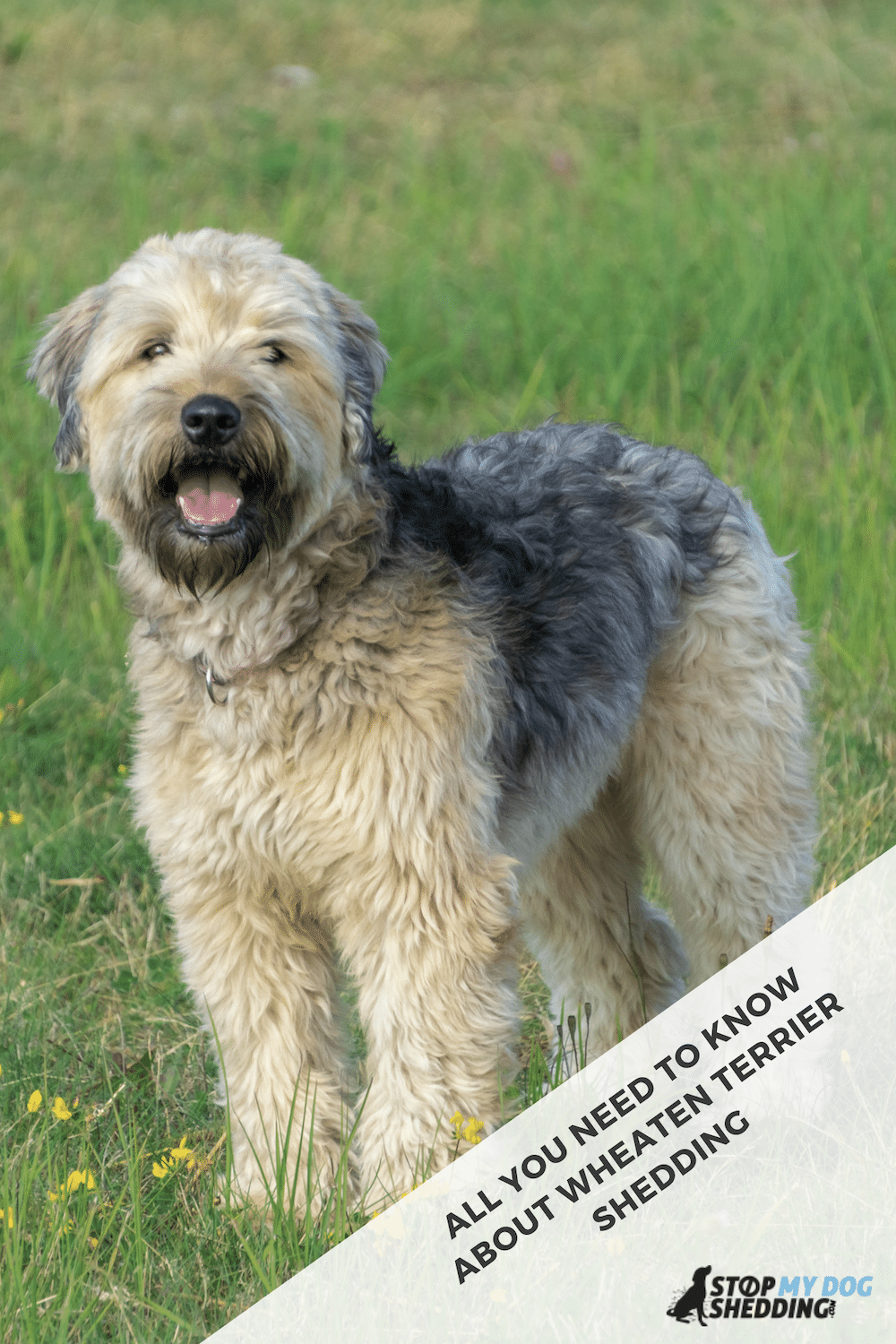